Joining the legal field has many bars before it. You have to take the LSAT or, in some instances, the GRE to be admitted into a law school. You then spend three years, paying an exorbitant amount of money, in school, ending with an average of $145,000 in debt. Then you must pass the Bar to become a licensed attorney, which, depending on where you are, have passage rates of below 40%. While each of these serves as a massive obstacle to the legal profession, there is yet another: Character and Fitness assessment.

Built into the Bar admission process, Character and Fitness is billed as a way to prevent unscrupulous people from becoming lawyers and taking advantage of clients. Essentially it is meant to keep the Giulianis and Avenattis of the world from bilking people out of money. However, its basis for doing so is based on debts and prior criminal contact, with the assumption being that those in debt or who have committed any kind of crime are substantially less trustworthy.

In New York, the same Character and Fitness process is being carried out through Section F of its Bar application form. In particular, Question 26 asks about prior criminal legal contact. This disproportionately bars people of color, especially Black and Brown people, who are subject to repeated unjust contact with the criminal legal system. This very question, which would not stop a Michael Cohen from becoming a barred attorney in New York, could just as easily stop a Black woman unjustly convicted of larceny from becoming an attorney. It also violates laws that prevent licensing agencies from gathering information about prior youthful offender adjudications and sealed arrest records to name only two instances of protected criminal legal history requested. Additionally, because law schools insist on asking the same question in their applications because the Bar does, it serves as a deterrent to even beginning the process of entering the legal profession.

Unlock the Bar believes that the steps outlined in the City Bar letter are the first steps to ensuring greater access to the legal profession. However, OCA cannot stop there. The legal field will remain unduly inaccessible as long as the Character and Fitness process exists, and abolition of that process must be the north star. True equity cannot be achieved until the Character and Fitness assessment is abolished.

You can read the Unlock the Bar letter, which goes into greater detail regarding the illegality of Question 26 and the need for abolition, below.

Download the Unlock the Bar letter as a PDF. 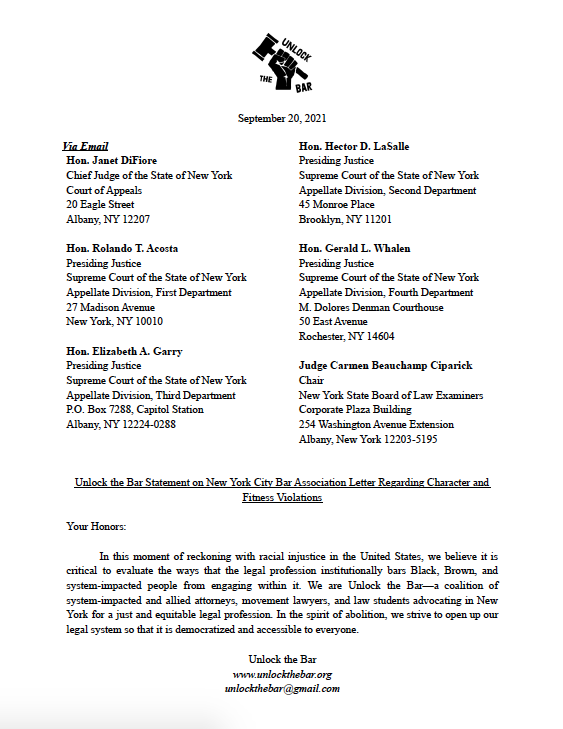 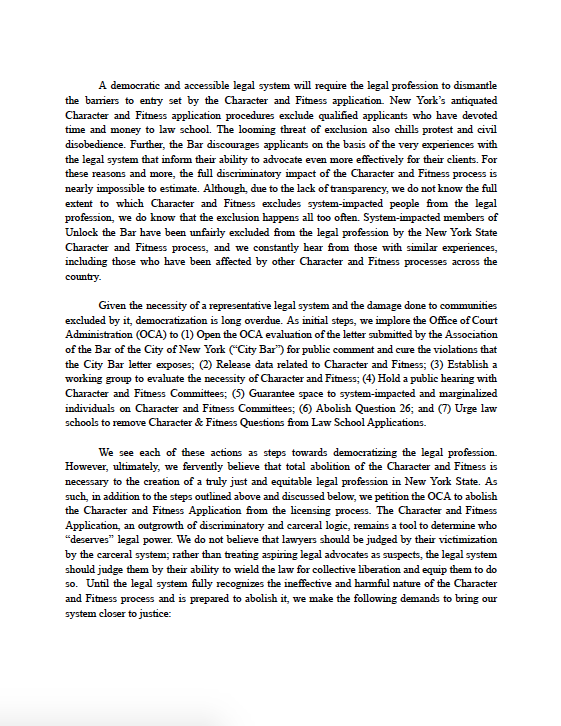 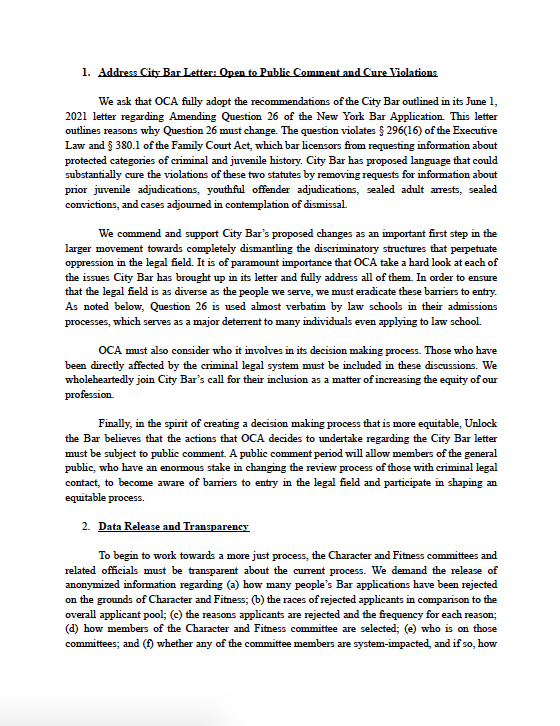 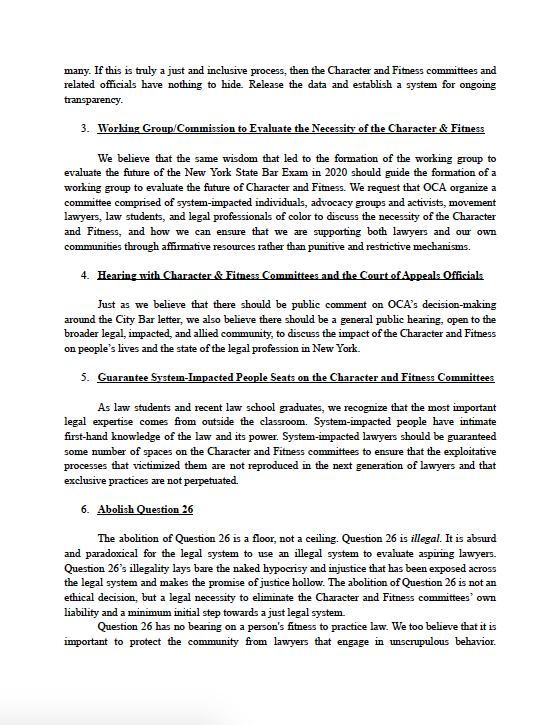 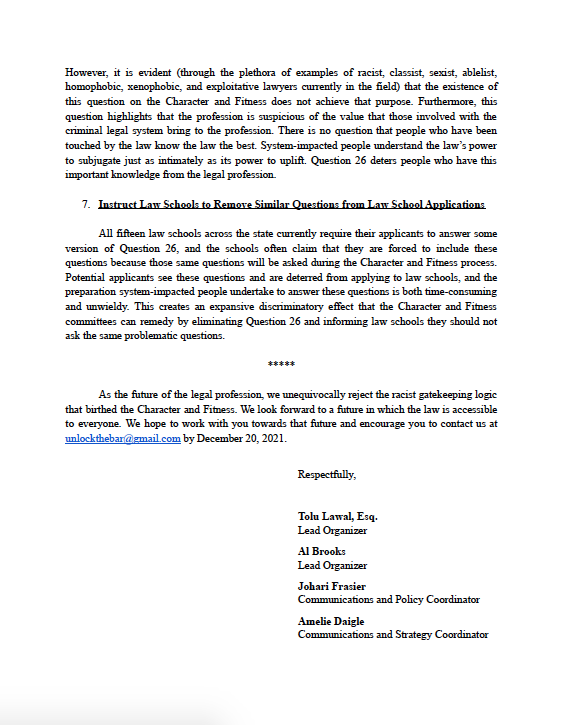 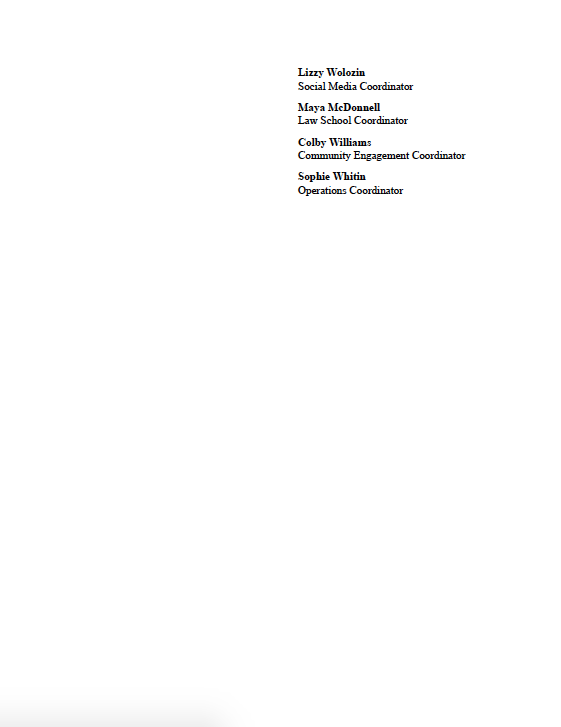 Johari Menelik Frasier is the Communications and Policy Coordinator for Unlock the Bar. He also currently serves as one of the Managing Editors of the New York University Review of Law and Social Change, of which The Harbinger is a publication.

Juliana Morgan-Trostle∞   We do not believe that petitioner’s participation in [nonviolent civil disobedience] can be characterized as involving moral turpitude. If we were to deny to every person who has engaged in a “sit-in” or other form of

Scholars discuss the most significant immigration-related cases before the U.S. Supreme Court, their ramifications, and what to expect in 2020.

Experts discuss legal developments and related ramifications one year after President Trump declared a national emergency at the U.S. Southern Border with Mexico in order to build a wall.