Diversity in Education and the Future of Affirmative Action

The Supreme Court has now issued its opinions in both Fisher v. University of Texas[1] and Schuette v. Coalition to Defend Affirmative Action,[2] and thereby reaffirmed its decision in Grutter v. Bollinger[3] that upheld the legal validity of narrowly tailored affirmative action programs in higher education. There still remains, however, an important issue to address regarding the nature of affirmative action: the changing racial and ethnic ancestry of black students enrolling in the nation’s law schools.[4]

Most Americans are not yet familiar with this historic change in attendance at selective higher education institutions, including the nation’s law schools. At the time that affirmative action admissions policies were instituted—in the 1960s—Americans did not draw distinctions, in terms of race, between Single-Race Blacks and Black Multiracials.[5] Anyone with one drop of “black blood” was considered black.[6] In other words, the concept of Black Multiracials did not exist. Nor did a significant distinction between native blacks and Black Immigrants or their children[7] exist in either the dominant American cultural attitudes or the black community. A main reason this distinction did not exist was because the number of blacks who were foreign-born constituted less than one percent of the nation’s black population.[8] As a result, the major assumption upon which selective higher education institutions developed affirmative action admissions plans was that the predominant beneficiaries would be those blacks with two native-born black parents as defined by the one-drop rule, whom I call “Ascendant Blacks.” Because of their parentage, these are the blacks with the greatest ancestral connection to the history of racial discrimination in the United States. Yet, Black Multiracials and Black Immigrants are increasingly replacing Ascendant Blacks as beneficiaries of affirmative action. Thus, in an ironic twist of fate, American society is on the road to virtually eliminating from its selective higher education institutions the racial/ethnic group of blacks most steeped in the history of racial discrimination that was the cause of the institution of affirmative action policies in the first place.

In 2010, new regulations promulgated by the Department of Education (“DOE”) took effect that changed the way all educational institutions collect and report racial and ethnic information, allowing those institutions to differentiate self-identified Black Multiracials from other blacks.[9] Up until that time, selective higher education institutions generally placed all those of African descent into a unified category, regardless of race or ethnicity. Nevertheless, before 2010, several studies pointed to the overrepresentation of Black Multiracials and Black Immigrants among blacks attending selective higher education undergraduate institutions. For example, a 2003 study by Princeton researchers noted that, of blacks entering twenty-eight selective colleges and universities in 1999, which ranged from highly selective to moderately selective, forty-one percent were either Black Multiracials or Black Immigrants.[10] A 2006 article discussed the results of a 2004 study, which showed that Black Immigrants comprised 20.9% of the nation’s black undergraduates and 27.4% of enrolled black graduate students,[11] and another study found that Black Immigrant high school graduates were almost four times more likely to attend selective colleges and universities than other blacks.[12] A study that tallied the 2007 reports from the Consortium on Financing Higher Education (“COFHE”), an institutionally supported organization of thirty-one highly selective private colleges and universities, showed that nineteen percent of the black students indicated that they had a parent of another race and an additional four percent answered “yes” to the Hispanic/Latino ethnicity question.[13] In contrast, according to the 2000 census count, in 2007, Black Multiracials accounted for only 6.3% of the black population between the ages of seventeen and twenty-one.[14]

The change in regulations by the DOE in 2010 has revealed further evidence of the widespread increase in the number of Black Multiracials at selective higher education institutions. For example, while varying each year, forty-two percent of the black students enrolled as freshmen starting at Yale University in the falls of 2011–2014 were Multiracial (fifty-four percent in 2014), at the University of Virginia for the same years it was 21.5% (with 22.4% in 2014), and at Indiana University-Bloomington Black Multiracials made up 18.4% of all black undergraduate students on campus in the fall of 2013.[15] However, many Black Multiracials may strategically check only the black racial box on their admissions forms, even though they also identify with other racial/ethnic categories, in an attempt to influence their likelihood of acceptance.[16] Thus, even these figures may understate the number and percentages of Black Multiracials among blacks enrolled at these institutions.

Until now, little research has been published on the changing racial and ethnic ancestry of blacks enrolled in the nation’s law schools. However, in response to the new DOE regulations, the Law School Admissions Council (“LSAC”) changed the way LSAT test takers designate their racial and ethnic identification. Following the requirements of the DOE regulations, LSAC registrants are now provided with the ability to both indicate whether they are Hispanic/Latino and to check all of the racial boxes that apply to them: (1) American Indian or Alaska Native; (2) Asian American; (3) Black or African American; (4) Native Hawaiian or Other Pacific Islander; and (5) White. In fact, while not required by the DOE regulations, the LSAC form also allows registrants to designate ethnic subcategories within both the Hispanic/Latino category and each of the broad racial categories, except for the “Black or African American” category. Thus, while these changes allow LSAC to separate the performance of self-identified Black Multiracials from self-identified Single-Race Blacks, it does not allow for the separation of Black Immigrants from other Blacks.

LSAC data reveals that the LSAT scores of Black Multiracials, particularly Black/White ones, are significantly higher than those of Single-Race Blacks.[17] According to LSAC figures, of the approximately 42,250 test takers who indicated some black ancestry and took the LSAT between 2010 and 2013, 9.5% were Black Multiracials.[18] The percentage of Black Multiracials actually increased every year going from 6.7% in 2010 to 10.7% in 2013.[19] The number and percentage of each black racial group that scored over 150, 155, and 160 are listed in the table. 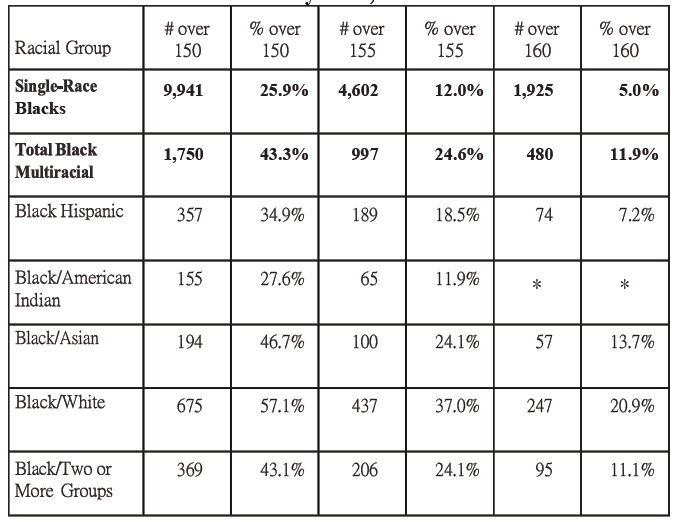 Since it is generally known that non-white test takers score lower on the LSAT than white test takers, it is interesting to note that the median LSAT scores of Black/White Multiracials appeared to exceed the median LSAT scores for all test takers. For comparison, the mean LSAT score for over 105,000 test takers for 2011–2012 was 150.66 for all test takers and 152.8 for whites.[21] However, over fifty-six percent of Black/White Multiracial test takers exceed 150.[22] As required of all educational institutions by the DOE regulations, the LSAT relies on a voluntary, self-reporting approach to collecting racial/ethnic identifications of test takers. There is therefore a good possibility that the advantage that Black Multiracials, particularly Black/White ones, have on the LSAT over Single-Race Blacks is actually understated by the LSAC statistics. Normally, self-identification is the proper approach to determine a person’s racial/ethnic identity. As indicated earlier, however, in the context of applying to law school where admission decisions are competitive, there is a distinct probability that many multiracial individuals will choose the box for their racial identification for the LSAC registration primarily for the strategic purpose of improving their admissions prospects.[23] Thus, many of those with black ancestries who truly identify themselves as multiracial, non-racial, a race other than black, or Hispanic/Latino may decide to only select the “Black or African American” racial box. Since, on average, Black Multiracials score higher than Single-Race Blacks, those Black Multiracials who strategically only check the Black/African American box could elevate not only their prospects for admissions but also the average LSAT scores of Single-Race Blacks.

No matter how overrepresented Black Multiracials and Black Immigrants are now in the nation’s law schools and other selective higher education programs, given their increasing percentages among Blacks who are approaching law school and college age, the negative impact of these overrepresentations on the admissions prospects of Ascendant Blacks is likely to increase significantly over the next decade. As a result, America’s law schools and other selective higher education institutions appear set on a path toward the virtual elimination of Ascendant Blacks from the campuses of most of these institutions.

[4].For most of the past one hundred years, American society has treated all blacks alike, regardless of their racial or ethnic backgrounds. This article seeks to sensitize the reader to the reality that the perception of all blacks alike is a relic of the past. Thus, I have chosen to capitalize “Black” when referring to racial and ethnic distinctions among blacks, such as “Black Multiracials,” “Black Immigrants,” or “Ascendant Blacks.” However, when referring to the older notion of all people with some African descent as alike, I use the lowercase “black.”

[5].The term “Black Multiracial” refers to those Blacks with a non-Black parent.

[6].For example, instructions for the 1960 census form continued the rule originally adopted in 1930: “A person of mixed white and Negro blood was to be returned as Negro, no matter how small the percentage of Negro blood.” C. Matthew Snipp, Racial Measurement in the American Census: Past Practices and Implications for the Future, 29 Ann. Rev. Soc. 563, 568 (2003).

[7].The term “Black Immigrant” refers to those with at least one foreign-born Black parent.

[12].Pamela R. Bennett & Amy Lutz, How African American Is the Net Black Advantage? Differences in College Attendance Among Immigrant Blacks, Native Blacks, and Whites, 80 Sociol. Educ. 70, 90 (2009). This study looked at a nationally representative sample of eighth graders drawn from the National Educational Longitudinal Study who were first surveyed in 1988. There were four follow-up surveys conducted in 1990, 1992, 1994, and 2000. Bennett and Lutz stopped their research at the 1994 data set. This set of data was from two years after the students should have entered college. They found that while 9.2% of Black Immigrants attended selective colleges and universities, only 2.4% of other Blacks did. Id. at 70, 79.

[14].Kevin Brown, Because of Our Success: The Changing Racial and Ethnic Ancestry of Blacks on Affirmative Action 151 (2014).

[16].For example, one website that provides valuable advice to students applying for law school specifically states in its section for multiracial applicants “if a school lets you identify only one racial category, check the box that indicates the most disadvantaged group: Native American or Black.” See Race and Ethnicity, DeLoggio Admissions Achievement Program, http://www.deloggio.com/diversty/race.html (last visited June 4, 2015). In addition, some researchers have observed that multiracial individuals are more likely to identify with the minority component of their background when forced to choose in constrained, high-stakes settings and when they have specific knowledge of how such race-conscious data will be used—that is, in the context of LSAT pre-law school testing, as opposed to being asked to “check all that apply” once in law school. A.T. Panter, Charles E. Daye, Walter R. Allen, Linda F. Wightman & Meera E. Deo, It Matters How and When You Ask: Self-Reported Race/Ethnicity of Incoming Law Students, 15 Cultural Diversity & Ethnic Minority Psychol. 51, 63 (2009).

[18].Statistics obtained from Josiah Evans, the Assistant Director of Social Science Research for LSAC (on file with author).

[28].U.S. Census Bureau, The Black Alone Population in the United States: 2012, Table 7: Nativity and Citizenship Status by Sex, for Black Alone and White Alone, Not Hispanic: 2012, available at http://www.census.gov/population/race/data/ppl-ba12.html.

As I started to look at mixed income housing, I realized that it was a strategy to manage the discrimination in the larger society.

"It's important to note that scholars have long observed that political discourse and political events can contribute to the frequency of bias incidents. In fact, this phenomenon has a name today. It's called the Trump Effect."

Scholars discuss the most significant immigration-related cases before the U.S. Supreme Court, their ramifications, and what to expect in 2020.