Over the past 20 years, the federal government and all 50 states have passed sex offender registration laws (SORLs) to monitor and publicize the whereabouts of “sex offenders” (people convicted of a broad range of offenses, which range in severity from child molestation to consensual sex among teenagers). Information about registrants, including their names, pictures and addresses, is posted online and, in some cases, actively distributed to neighbors, subjecting registrants to profound stigmatization and the risk of vigilantism. In many states, registrants also face restrictions on where they can live, work and travel, leading to chronic homelessness, unemployment and estrangement from loved ones, as well as the possibility of new criminal charges if they fail to comply. This panel series will examine how SORLs have affected the lives of roughly 650,000 registrants (and their families), what effect they have had on rates of offending, and how they might be reformed.

Panel 1: The Impact of SORLs on Registrants

Panel 2: The Impact of SORLs on Rates of Offending 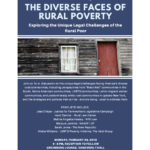 A series of intersectional talks given by four community organizers, a movement lawyer, a poet, and a scholar who shared their work and reflections on abolition and building viable alternatives to policing and incarceration 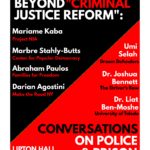 A series of three panels on organizing workers, the relationship between labor and non-union workers, and the future of alternative labor organizing 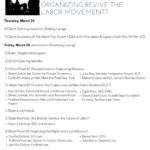